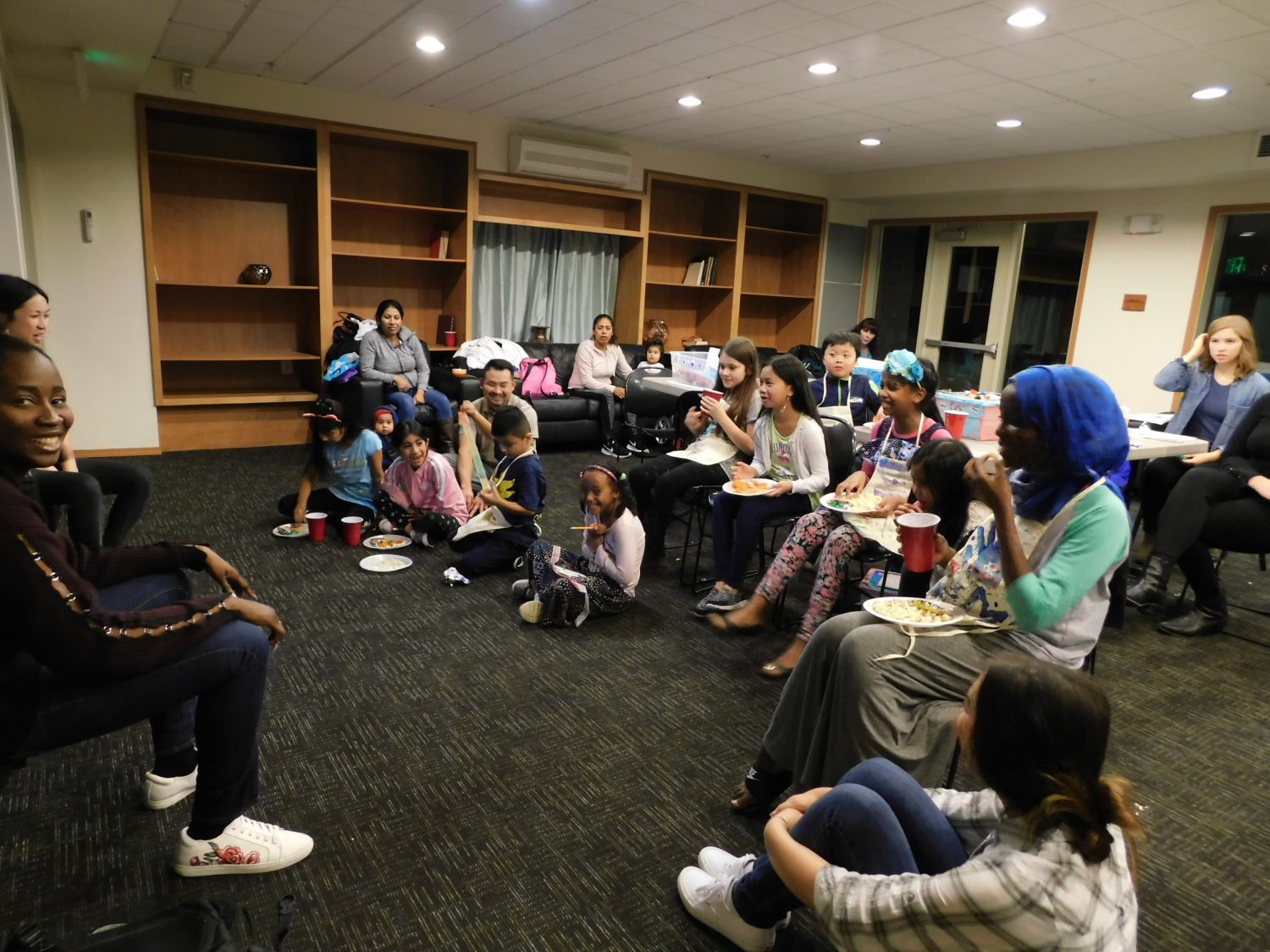 Kids gather to hear a cultural folktale from the guest storyteller. Photo by Kelly Guava Jelly.

It was a particularly cold and wet Wednesday evening in January but the community room inside the Claremont Apartments on Rainier Ave was buzzing with commotion. Kids outnumbered adults, their voices and laughter spilled out the door and into the hallway. Spread out over the neatly arranged tables were colorful prints, patterns, and art supplies. There was no mistake; Tales of Art was happening here.

On this gloomy night, the program served as an especially warm sanctuary from the elements. After settling down, the children were instructed in several languages, reflecting the diversity in the room, to collect their personal art boxes from the stacks placed on a nearby counter. The containers hold artworks that the kids have been creating over the past few weeks.

Tales of Art is simple in concept but remarkable in what it accomplishes. Each week, a guest storyteller from the community is invited to share a folktale from their culture. Afterwards, program volunteers kids create art inspired by the story, which will be compiled into a book at the end of the program. 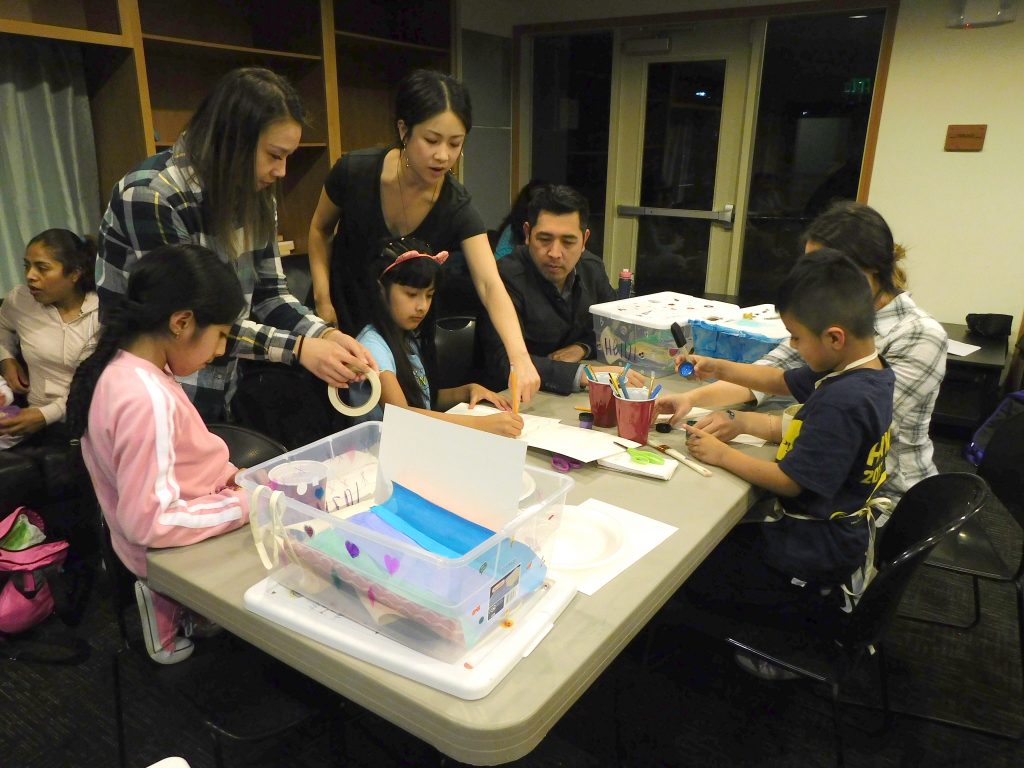 The project is managed by Soul Societies, a nonprofit, volunteer-run organization that originated as a personal mission to bring art supplies to those who might not have access to them. It now offers an adult art program to residents of Bread of Life Mission’s homelessness recovery program. The art is available for sale with proceeds going toward more art supplies. To artists and co-founders Zian Dinh and Erin Oostra, it’s more than just an art program. Soul Societies is an outlet for creatives to volunteer their time and talents, gain inspiration, and help them connect to the community.

“Art overall is so powerful. It can help transform how you think about something in a way that words can’t,” said Erin, a dual citizen from Calgary, Alberta who now calls Seattle home. Growing up, she was always drawing but it wasn’t until after high school that she thought about graphic design as a career. Today she works for Nordstrom and picks up freelance projects on the side.

“You don’t even have to be good at it,” Zian chimed in. “And it can be therapeutic!”

Volunteers work with kids during the Tales of Art program. Photo by Kelly Guava Jelly.

The dynamic duo behind Soul Societies met at Seattle Central’s Creative Academy design program in 2013 and quickly became good friends. At that time, Zian was a regular volunteer at Bread of Life Mission. While serving food one day, she met Ken, a resident of the Mission, and they they started talking about art. He showed her a sketch with beautiful architecture and line work, drawn using a cheap ballpoint pen and scrap paper. Zian was astounded and immediately wondered what he could accomplish with quality materials.

The timing couldn’t have been more perfect as Zian had been thinking about other ways she could support the Mission. For her final project with the Creative Academy program, she wrote up a plan to bring art to the residents of Bread of Life. She called it Art 20/20 and enlisted Erin to design a logo. Eight months later, the program was up and running, not only helping those at the Mission, but helping the two become inseparable friends.

“Zian influenced me,” Erin recalls. “I never realized volunteerism could be fun.”

Zian, who was born in New Mexico and relocated to Seattle after graduating from college, came to graphic design after working several years in a job that she said “lacked creativity.” A friend told her about the Creative Academy and she decided to change her path. She now works for Amazon and follows her passion of connecting people through art with Soul Societies.

Creating social impact through art fuses the two passions of Erin and Zian’s lives. Their vision for the future of Soul Societies is a continuation of their mobile art platform connecting creativity and life and taking it everywhere they can. Celebrating and supporting their volunteers while evolving to meet the needs of those they serve, Soul Societies is raw and undeterred art, of and for the people.

Back in the room at Claremont, tension was slowly building as the guest storyteller was late due to traffic. Light snacks were provided but the kids were hungry in more than one way. They were promised a story and art activities.

“Our storyteller is here!” Zian squealed suddenly and ran out the door. A few minutes later, the guest of honor everyone had been waiting for stepped in, smiling brightly. She calmly gathered the kids in a semicircle at the front of the room and launched into a Nigerian folktale involving a rabbit and a tortoise – not the usual tale about winning a race. Here and there, the kids were asked to sing along in Yoruba, a language of West Africa. The adults, unable to contain themselves, mouthed along.

With the tale’s conclusion and a valuable moral lesson learned about honesty and greed, the kids moved back to their tables to begin the Art portion of the program. They were given sheets of papers with outlines of a rabbit and a tortoise. Further instructions were not needed. 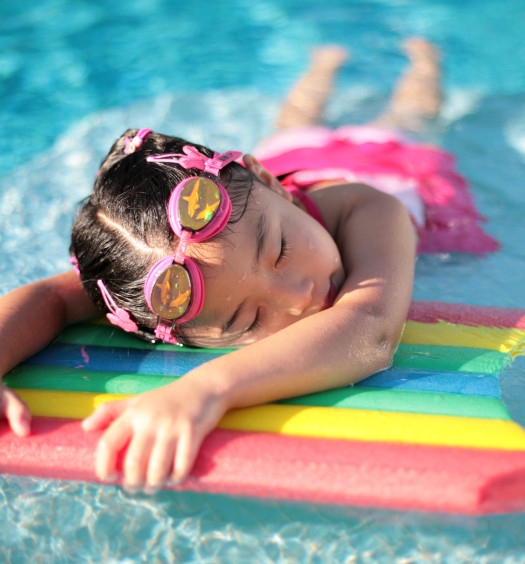 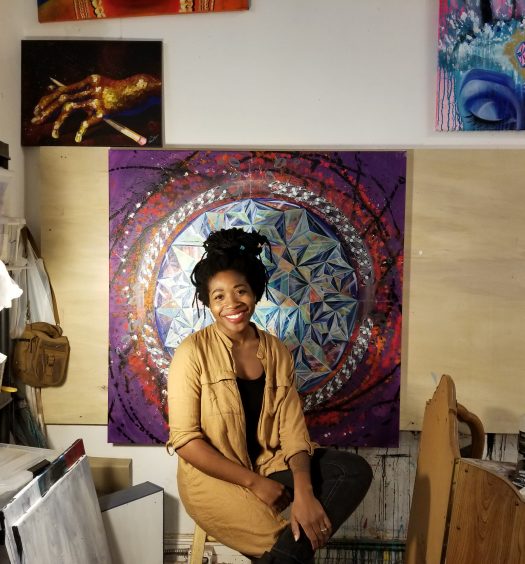