By Ethnic Seattle  •  5 months ago

Earlier this year, researchers at the Indian Institute for Technology in Jodhpur discovered the scientific secret behind the allure of Indian cuisine. While Western dishes tend to combine similar flavors together, Indian dishes typically use at least seven ingredients that do not contain overlapping flavors. As a result, the ingredients (especially the spices) interact with each other, each bringing unique flavor and adding complexity to the finished dish.

Curry, which originated in India and is beloved throughout Asia and beyond, is a prime example of such complex cuisine. But what exactly is curry, how does it vary country to country, and how can you eat it locally—including in your home?

Historians suggest that the word “curry” derives from various Indian language definitions for kari, including “sauce” and “grilling.” Some make reference to the kari leaf found in certain Indian dishes.

Perhaps as difficult as determining the etymology is defining the dish itself. Most agree that curry is a “stew-like” dish, made with a variety of meats and/or vegetables, that contains curry powder or curry paste. The curry can be “wet,” with a sauce or gravy made with stock, cream, milk, yogurt, or another liquid. Or it can be “dry,” where the cooking liquid evaporates, leaving the other ingredients coated with a spice mixture.

It’s the spices in the powders and pastes that cause curry to vary country to country, region to region, and even family to family. In common is a complex combination of herbs and spices (whole or ground) that usually (but not always) contains turmeric, cumin, coriander, and chili peppers. Many curries also have cardamom, ginger, and garlic. To a lesser extent, some contain tamarind, fenugreek, cinnamon, and other ingredients.

Curry originated in the Indian subcontinent, but its popularity reaches around the globe. Buddhist monks took curry eastward to Burma, Thailand, and China. Coastal traders spread it onward to Indonesia and the Philippines. Further trade and transport eventually brought curry to the West, including Portugal, Great Britain and the Caribbean. Curry’s evolution and appeal has made it an important part of fusion cuisine internationally.

To look at some specific examples, let’s start with India, curry’s birthplace, and home of a great diversity of curries. Some are made with ghee, while others deploy a variety of oils, including coconut oil. Some come with naan, while others are atop rice. There are various types, such as Korma (mild, often made with yogurt, and containing almonds or other nuts), Tikka Masala (rich and buttery but on the mild side, as it’s mixed with ghee and cream), Vindaloo (traditionally made with vinegar and garlic, it’s spicy from black peppercorn and tart from lemon juice, and traditionally didn’t contain potatoes—but now does), and Madras (spicy, and typically made with tomatoes).

Thai curries are generally characterized by color from specific ingredients added to the other paste components, with Green containing green chilies and Thai basil (and perhaps other herbs), Red containing red chilies, and Yellow containing turmeric and sometimes curry powder. There’s also Massaman with its roasted peanuts, and the mild but rich, sweet, and creamy Panang Curry.

Malaysian curries generally contain more turmeric, chilies, and garlic. They tend to be creamy with a coconut milk base. (Think laksa.) An exception is Rendang, which is tomato-based and typically dry (and usually made with beef).

In Vietnam, Ca Ri Ga is a stew-like curry that’s not as thick as others. Coconut milk gives the curry body, with the flavor less spicy than curries of other countries. The use of lemongrass is a local influence. The Vietnamese eat this curry over rice noodles, or borrowing from the French, with a baguette.

In Japan, Kare Raisu (curry rice) is an extremely popular dish. This roux-thickened curry actually comes from British influence. Also popular is Kare Udon (a soup with thick udon noodles); there’s even Kare Pan, which is a curry-filled deep-fried bun.

Thai Savon has all of the Thai curries mentioned above. Chef/owner Faye George explains that to maintain consistency and to save time and money (“galangal prices get so high!”), she uses pre-made Mae Ploy paste, adding just a little salt and sugar when she combines it with coconut milk. Her green curry with free-range chicken has red and green bell peppers, green beans, bamboo strips, and Asian eggplant. Her curry achieves that desired Thai balance of sweet, sour, salty, and spicy—though perhaps a little on the sweet side.

At the Cutting Board, Japanese-style beef curry is the foundation of a number of dishes. In its simplest form, an order of Kare Raisu serves up a plate half-full of pressed rice alongside an almost overflowing portion of beef curry. Chef/owner Akiyoshi Saito says he doctors up S&B Oriental Curry Powder with honey, ketchup, and Coca-Cola, slow-cooking it with only onion and ground beef. It’s quite gravy-like, and better with the addition of one of the many fried items—my favorite being Tonkatsu (a breaded, deep-fried boneless pork cutlet) to create Katsu Kare. 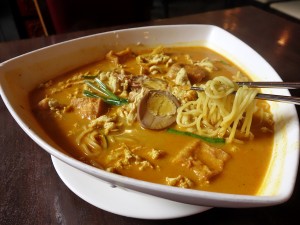 There’s a bevy of noodle bowls at Gourmet Noodle Bowl, with Laksa Curry Noodle Soup one of the most popular. The staff tells me that this Malaysian-influenced dish (on an otherwise Chinese menu) is made with a number of powders. The cook stir-fries onions with dry chili, then adds turmeric, fennel, and coriander seed. Shallots and galangal go in, followed by coconut milk and chicken broth. The finished bowl contains chicken, Chinese chives, a hard-boiled egg, and of course noodles, but my favorite ingredient is the tofu puffs which soak up the deliciously spicy curry.

The good news is that there are quality pre-made pastes available at many local grocery stores, especially Asian stores like Viet Wah and Uwajimaya. For Thai, the aforementioned Mae Ploy pastes are a staple in my house. Keeping a long-lasting container of paste in the refrigerator along with cans of coconut milk in the cupboard means the ability to make curry in a hurry with any combination of meats and vegetables I have on hand. I’ll use fish sauce, Chinese rock sugar, lime, and chili to find the desired harmony of flavors. 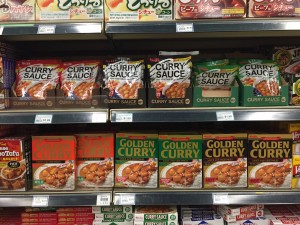 Also in my cupboard will always be S&B Golden Curry Sauce Mix, the red boxes designating the Extra Hot variety. These pre-made blocks of roux (House is the other top brand, with their Vermont Curry most popular) are generally available in the same Asian grocery stores. They’re easy to prepare; just sauté meat (I prefer chunks of pork), potatoes, carrots and onions, then add the roux at a simmer. You can throw in peas and even corn toward the end of the cooking process.

I’ve made Japanese curry from scratch in the past, with Japanese friends laughing because “no one does that anymore.” The boxed roux is convenient, but with so many homemade recipes available online, it’s fun to experiment with “secret” ingredients like apples, dashi, and even chocolate. (Recall Cutting Board’s specialized triumvirate of ingredients.) The most common ingredient in Japanese curry is that S&B Oriental Curry Powder, which makes me want to experiment further with it, perhaps even trying my own spin of Gourmet Noodle Bowl’s Laksa Curry. The cooking takes time, but the payoff is depth and nuance of flavor, a sense of freshness, knowledge of what’s actually in the dish, and the love in preparing your own curry. 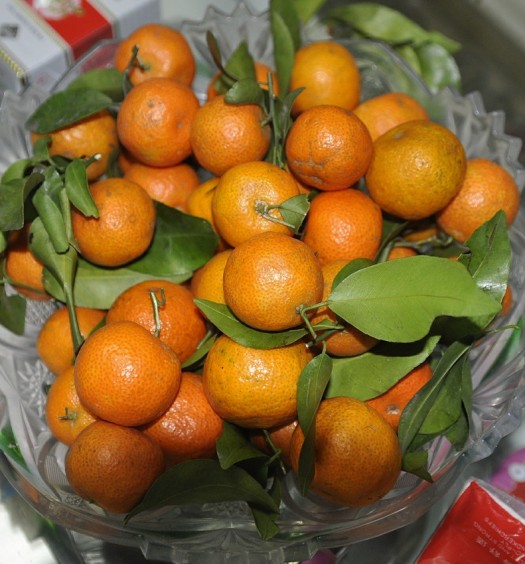 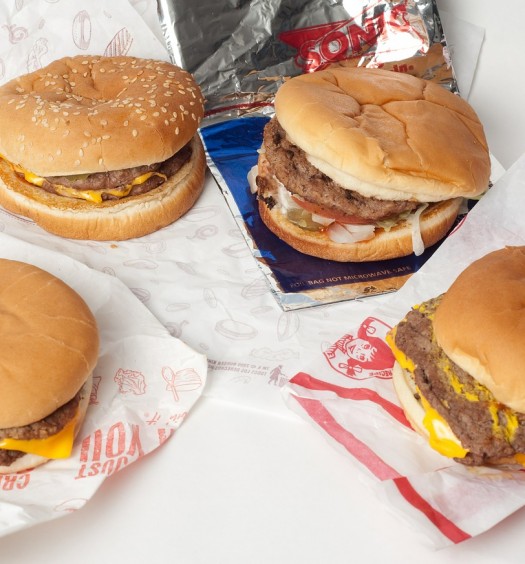 The Asian Diet vs. The American Diet

Read More
The Asian Diet vs. The American Diet
Submit a Comment