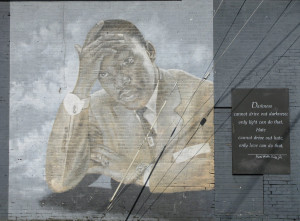 The Central District, also known as the “CD,” is bordered by East Madison, Jackson Street, and Martin Luther King, Jr. Way. In the mid-1800’s, the area was cleared, creating an ideal place to live, as it was conveniently located near the Central Business District. The neighborhood has historically housed a variety of different cultures at different periods of time, beginning with European Americans, followed by the Japanese, the Jewish, and the African American communities.

The Central District also served as a central hub for the Civil Rights Movement during the 1960’s within the Seattle area. The late 1960’s also saw a push for living condition improvements for those living in the neighborhood, as well as a rise in services and resources being offered.

The many establishments and businesses that continue to exist today serve as a reflection of the CD’s history of movement and development as demographics of the neighborhood changed.

Did Ya Know: After World War II, the Douglass-Truth Branch (known as the Henry L. Yesler Memorial Library at the time) served an increasing number of African Americans. The branch was renamed the Douglass-Truth Branch in 1975, after Frederick Douglass and Sojourner Truth, and it is currently home to the largest African American collection in the Seattle Public Library system.