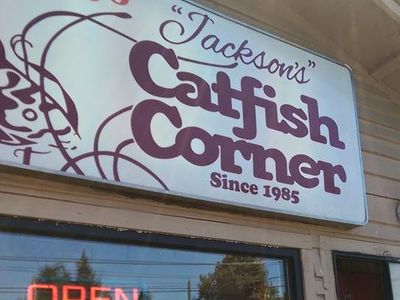 Now being run by the grandson of the founders, the Seattle favorite finds a new home in Rainier Valley.

Many mourned the closure of Seattle’s Catfish Corner last summer, but true fans knew it hadn’t been the same for quite a while. Founders Rosie and Woody Jackson sold the beloved Central District soul-food spot in 2008 “to relax.” Then after more than two decades as a favorite in the neighborhood and beyond, it went downhill.

“It was heartbreaking hearing it,” their grandson Terrell Jackson says. He worked at Catfish Corner in high school. “I know how hard my grandparents worked for it. And they didn’t deserve that.”

Now Terrell has brought the civic treasure of deep-fried goodness back to life, adding the family name: It’s Jackson’s Catfish Corner now, and it’s farther south, in Rainier Valley. He started under a tent in a motorcycle club parking lot in Skyway in April, then moved to outside the Othello light-rail station; he opened the brick-and-mortar space in June. Marshawn Lynch has already come by to eat.

Loncheras: The Food Trucks that Started it All

Read More
Loncheras: The Food Trucks that Started it All
12 months ago
Community NewsShopping